Why Aren't More Animal Studies Folk in the Academy Vegan?

Last month, I gave a talk at UC Berkeley at a conference called Funny Kinds of Love: The Ethics and Affects of Human-Animal Relationships hosted by the Center for Science, Technology, Medicine & Society. My brief twelve-minute talk, titled "Eating Animals: A 'Funny' Kind of 'Love'", is up on YouTube. Have a look. And while you're at it, have a look at my friend Vasile Stanescu's talk, "Why Loving Animals is not Enough: A Feminist Critique". Enjoy!
Posted by RCJ at 11:31 AM No comments:

New Maternal Deprivation Research at U of Wisconsin

There has been a lot of discussion of chimpanzee aggression this past week.  A baby chimpanzee was killed in front of zoo visitors by a male chimpanzee at the LA Zoo and a graduate student who had just begun working with chimpanzees was horrifically attacked by two male chimpanzees at Chimp Eden in South Africa.  Journalists and much of the general public are shocked.  Most people familiar with chimpanzees are responding to the shock by explaining that chimpanzees are stronger than humans, that aggression is a part of their natural behavioral repertoire, that chimpanzees are not domesticated and will never be “tamed.”
I think there is more to it.
The aggressors are captive male chimpanzees who have not yet mellowed with age (some older male chimpanzees can be remarkably caring and sweet – but no one should let their guard down around them nonetheless. This is one especially sweet old guy, Keo, who turned 54 this week.  He is the oldest male chimpanzee in captivity).
Captivity is stressful.  Even the best captive conditions are stressful, and from what I gather, both the LA Zoo and Chimp Eden are among the places that really take chimpanzee well-being into account.
One very serious stressor for chimpanzees is being exposed to new people, whether those people are unfamiliar humans or chimpanzees.  At zoos, having new people constantly in one’s environment  is a significant stressor. The stress level during introductions between chimpanzees is always high, and a new baby inevitably causes shifts in group dynamics, which also adds to the tension.   Add zoo visitors gawking and oohing and ahhing at the new baby and, well, the sad outcome at the LA Zoo could have been predicted.  But that it was predictable, doesn’t mean it is the same as infanticide in the wild.  No one really knows enough about infanticide in the wild.  Maybe one cause is stress.  To point to infanticide in the wild as an explanation for what happened at the zoo, seems simplistic and wrong-headed.
Captive chimpanzees engage in very different behavior than wild chimpanzees.  To take just one obvious example, no one would walk among captive chimpanzees in the way that primatologists have been doing at field sites throughout Africa for decades.
Perhaps that slippage contributed to the tragedy at Chimp Eden, where the young graduate student was horribly mauled.  This incident also involved a lot of new people and territorial issues with captive chimpanzees. The student was new to the facility, he was lecturing to visitors to the sanctuary, and he was standing in an area (with his back to the chimpanzees?) where he should not have been.
Yes, chimpanzees are aggressive.  But captive chimpanzee aggression is different than wild chimpanzee aggression.  It would be interesting to learn more about each.
Aggression is just one part of captive chimpanzee behavior.  Another big part of their behavior is their compassion, courage, wisdom, and humor. And in some rare circumstances it makes sense for those who know them very well to interact directly with them.  This is what Gloria Grow did when beloved Pepper was dying.  I’m glad she was able to be with Pepper in this way.  It was a tribute to the depth of their relationship and Pepper’s profoundly “good” nature that Gloria was able to intimately hold her as she left this world.  Please read her memorial tribute here. RIP Pepper.
Posted by LG at 6:55 PM 3 comments: 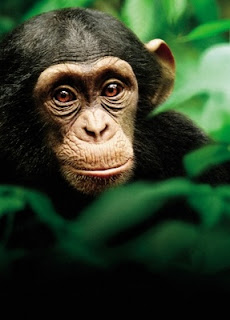 I saw the movie Chimpanzee during the Environmental Film Festival at Yale. Visually it is absolutely stunning and I hope people will see it for that reason alone. I ran into a colleague on the way into the theater and she said she thought she would see me at the "cheezy chimp" movie. I actually thought it wouldn't be "cheezy" and I was wrong. It is a Disney film after all and it is aimed at young people. But the story is based on the real altruism of adult male chimpanzees who have adopted orphans as observed by Christophe Boesch and his team in the Tai Forests in Cote d'Ivoire.

The audience was filled with youngsters and I have to confess I felt joy hearing the children in the audience laughing as the young chimpanzees on the screen laughed and played.

But I did experience a tad bit of discomfort at times watching the audience react to the film. As many of us are working hard to end the use of chimpanzees in entertainment, I think this film walks a fine line. It is designed to entertain and chimpanzees are the entertainment.

So I think it is crucial that at every opportunity people who are talking about the film remind film watchers that no part of this film used captive chimpanzees, that chimpanzees are endangered in the wild, and that they need our help. I wish there was more information available in the theater for movie goers who are interested in learning more about ways to help chimpanzees. I'm going to go to see the film again during the first week (portions of the proceeds from admission will go to JGI projects) and bring some flyers. Maybe the theater will keep the extras for other shows.
Posted by LG at 11:08 AM No comments: 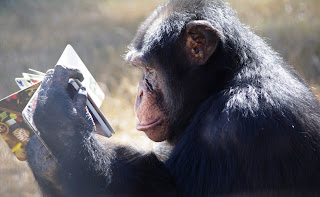 I love books. I don’t know any academic who wouldn’t say that they don’t at least respect and admire books. We even defend books. My University has to cut some titles from the library to make more room for other, newer books and there has been a passionate discussion about the value of the volumes we have and how important it is to protect them.

John VandeBerg, the chief medical officer at Texas Biomed, told NBC that chimpanzees are “like books in a library” a quote he echoes from a letter he co-signed with the other three chimpanzee lab directors. Lisa Myers was right on to challenge him in her report on Rock Center.

Though there may be semantic similarities between the discussions at my University about saving books in our library and the debate that is happening about using chimpanzees for research, let’s be clear. Chimpanzees are not in the same ontological or ethical category as books. Books are marvelous repositories of thoughts and ideas. Books are certainly worth preserving. Good books are the sorts of things that one can go back to and learn something new from. But my students are also repositories of thoughts and ideas, and I always learn from them, yet my obligations and responsibilities to my students are on a completely different level than any I might have towards books. Here is one obvious difference – I value books and want to preserve them so that others can enjoy or learn from them. My students are valuable in their own right, even if nobody likes them or their ideas aren’t very good (this is not true of any of my students). What is valuable about my students that makes them fundamentally different from books is that they have feelings and interests and their own lives to live. Books don’t. Chimpanzees do.

It seems silly to have to even write that, to point out that chimpanzees are more similar to my students than they are to books, and it raises serious questions about the thought processes of the directors of our nation’s chimpanzee research laboratories. It makes me wonder about the meaning of their claim that they respect the chimpanzees and have the highest reverence for them. How can they respect a living, feeling, experiencing being if they think of that being as an inanimate object from which knowledge can be extracted? As I said, I respect books, but the sort of respect I have for books is profoundly different than the respect one should have for sentient beings.

In order to treat a chimpanzee with respect, in order to promote his or her well-being, one has to understand that individual’s personality, specific needs, her interests, her fears, her emotions, and her thoughts. Understanding chimpanzees requires a sort of empathetic process, one that these lab directors clearly don’t engage and can't engage if they think of chimpanzees as being like books.

Chimp Research Coming to an End 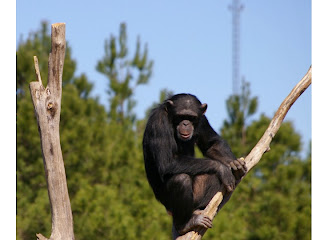